Sunday afternoon, I woke up after a nap with a deep hankering for Chinese food. I woke Clint up and said, “Let’s go look for a Chinese restaurant!” We jumped in a cab, directed the driver in Engrish, “Authentic Chineeese restaurant!” He nodded knowingly, and sped off. He dropped us off in an empty street at a restaurant with a washed out sign. After some failed attempts to push the door open, I realized they still employed the old-styled sliding doors. Well, we did ask for authentic.

Inside, we saw one occupied table – never a good sign. We asked for a table for two, and the host ushered us upstairs. I couldn’t understand why he didn’t just sit us in any of the 20 open tables downstairs. He took us into a private room, turned on the AC, and left us to our own devices. The place truly looked like an old restaurant I used to see in those Chinese movies I watched as a kid. The room had a round table with the obligatory lazy susan. On the side of the room were sofas that had probably been around since the ’60s. We had read somewhere of such a restaurant in Gunsan that was reminiscent of an old Chinese brothel. I think we found it.

We found a menu in Korean, and tried deciphering it anyway. The waiter came in moments later, looked at us, shook his head and handed us English menus. After much deliberation, we decided on beef with broccoli, seafood fried rice, and though I didn’t see beef flat noodles on the menu, I thought I’d try asking anyway. Turns out, beef flat noodles is an “American” thing! And Bin Haewon is too authentic for that foolery!  In a pressured frenzy, I pointed to a random prawns dish on the menu, “I’ll have this!”

The cook brought us our plates one by one. Clint’s beef and broccoli was tasty, but the beef was sparing. The fried rice wasn’t too flavorful, but would be the perfect complement to the dish of the hour: fried prawns with garlic sauce.

There [are] no words that could describe the taste that hit my tongue. It must be some ancient recipe almost lost in time, but this Chinese-Korean immigrant held these secret recipes and fled to Korea [where] he opened his restaurant. He patiently waited 60 years for the coming of Kim and Clint so that he could unleash all his patient glory and skillful expertise on plates in front of us……. I may dress as a ninja and breach the gated windows, sneak into the basement [where] there is a safe… Steal the ancient recipes and flee like a thief in the night and build a chinese restaurant back in the states and they will all look like old brothels…… Yes yessssss

Yeah, it really was that good. 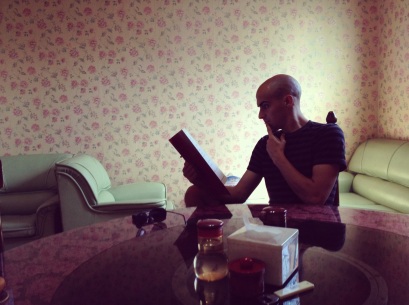 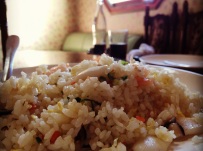 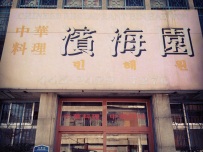 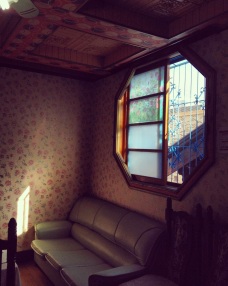