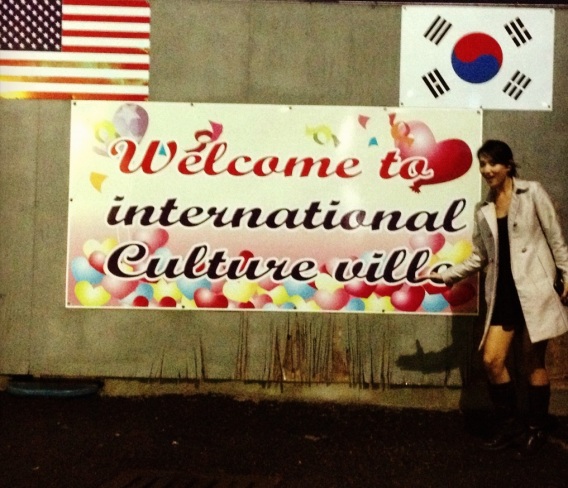 If you’re in the military and being deployed to Kunsan, A-Town’s reputation has already preceded itself. As a military girlfriend, I get the gratification of experiencing the notorious rows of drinking and karaoke establishments, true Korean fast food,  rowdy patrons, and of course, Juicy bars firsthand.

We waited patiently as flanks of base taxis drop people off and pick up eager partiers. We share a cab with a seasoned woman and her guy friend. She’s talkative and shares with us her “kimchi cab” experiences: She once shared a cab with three other friends, male and female, and the cab driver thought it appropriate to turn on pornography. Needless to say, awkwardness ensued. She also suggested we visit Club Las Vegas in A-Town… err… International… Bleck. I’m sticking with A-Town. Apparently, not once has she been and they hadn’t played a video called “Satisfaction.” The kicker? The video showcases various shots of the male form. Which has caused me to deduce two things:

A-Town first appears as an ’80s movie set, dreadfully outdated in architecture and decrepit in personality. Upon further investigation, all the previous superficial observations still held true. The restaurants are run-down. The hostess/cook/presumably owner of one restaurant was nice enough, but the food was lacking in allure.

Christine’s karaoke bar probably hasn’t been updated since its inception. If the point is to show Americans some culture, they’ve succeeded in giving us a historical glimpse of their version of a happier time – as a museum where the exhibits never change. And to top it all off, three small children ran in and out of the bar freely. There has to be some sort of law against this!

The final stop was Hill Top Bar where the soju never stops pouring and Mama San watches your every move. The Juicy* culture has always been a peculiar concept to me. Nightly, these women sit, converse in broken English, and feign drinking with men after men. They dress in typical club-wear that comes up above their thighs and leaves little to the imagination. They grab onto these men, shove drinks down their throats, and take whatever action necessary to keep Mama San happy, which is usually coaxing their patrons to buy more and more drinks. And yet, there is no solicitation involved. Perhaps more peculiar than these women are the customers. They pay 10,000 won for a kettle of soju, 6,000-12,000 won for a single drink for the girls; some end up with a 200,000 won bill at the end of the night! All for some flirting and maybe a tawdry kiss? If that’s what it takes to pass time, I bear no judgment; but I suppose I will never understand it.

I won’t deny the fact that I was entertained the entire night since human anthropology is so fascinating to me. And I’ll probably visit A-Town again when friends ask. In all earnestness, though, I hope to see this place evolve. If it is meant to be the portal for Korean-American military relations, it is in dire need of an update. Changing the name alone does nothing for improvement.

*Juicy – moniker for a woman who provides companionship and entertainment for male patrons in a drinking establishment; named for the juicy appearance of their glossed lips; also known as a hostess in some regions

2 thoughts on “Welcome to A-Town – I mean… International Culture Ville!”

Saturdate ♥️
Kanpai! We KILLED that BILL. 😅
Should we place bets on which one(s) will survive? 😅
Mata ne, Shimoda! See you on the other side of rainy season.
Happy America Day from across the world!